Yesterday I had the pleasure to be on stage with Freddy Kristiansen talking about NAV on Docker and – for me – he announced something big: official support for NAV on Docker.

Let’s take a look at what Microsoft is actually going to support: All cumulative updates for NAV 2016 and 2017 (in all language versions) will be available the „traditional“ way for download as DVD images but also as Docker images (see presentation slide below). At first they will only be supported for test and development, but production support should follow soon. That means that probably by the end of the year we should be able to run production environments on Docker and right now can run test and development. With that Multi-CU environments and resource governance for NAV Server instances are available, just like that. The prereq is Windows Server 2016 (and Windows 10), which might be a problem for some organization, but that problem will probably solve itself over time 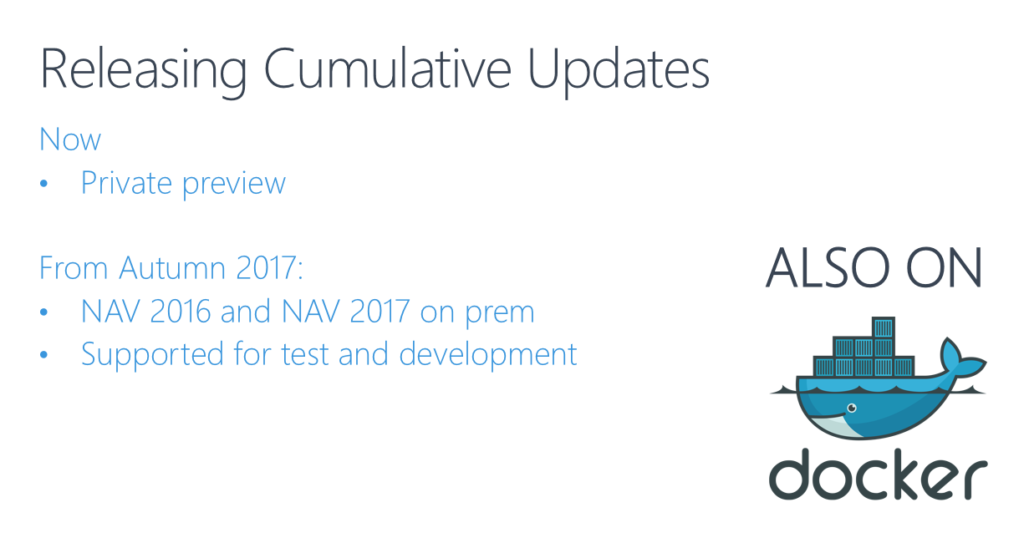 In an even more Docker-oriented move, Microsoft also is delivering the modern developer tooling only on Docker (see presentation slide below)! That means that the three different environments currently available as ARM templates (Financials Sandbox, New Dev preview and the full demo environment) will be merged into one and be made available as container images. That means that you will still be able to spin them up almost exactly the same as you are used to but they will just provide a Container environment, pull the right image and run it (and do whatever will be made available on the host). Even more amazingly, there will be a standard image about one months behing development which should be the same as production D365 but also Insider images with the monthly current build on a „slow ring“ and bi-weekly builds on a „fast ring“ with the possibilty of individual new builds arriving almost instantaniously. That means that approx 15 minutes after the build is created in Lyngby it should be available on Docker, which is another thing that would have seemed completely impossible until now. 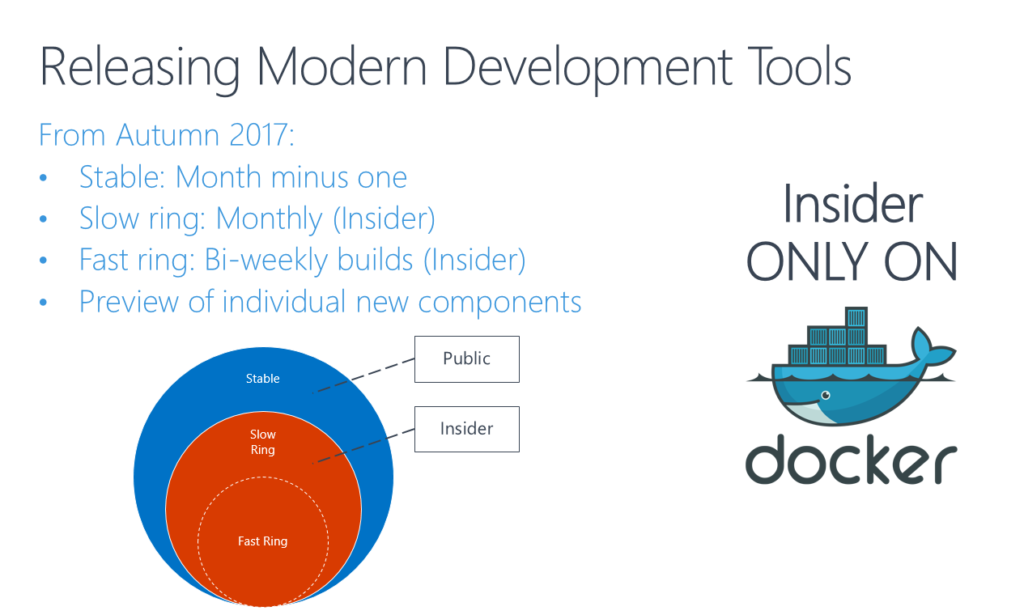 If you followed this blog, you know that I started working on containerizing NAV in November last year with Jakub Vanak joining me very quickly after that. Only ten months later we now have support for test and development with production support probably following soon! That is really quick for a large organization like Microsoft and also for a change of such consequence. Let’s see what will follow but with the speed this got adapted, I’d rule out almost nothing (support for SQL on Linux, anybody?)

« Join me at Directions or TechDays