Use the VS Code Docker Extension with a remote Docker host

Use the VS Code Docker Extension with a remote Docker host

If you are a NAV developer working with Docker containers and the new dev environment aka VS Code (or for that matter anyone using Docker containers and VS Code), then you should very much look into the Docker extension for VS Code. It lets you see the registries you are using, the containers running on your host and the pulled or created images. You can also interact with those like looking at the logs, starting and stopping containers, opening a shell or tagging and pushing an image. 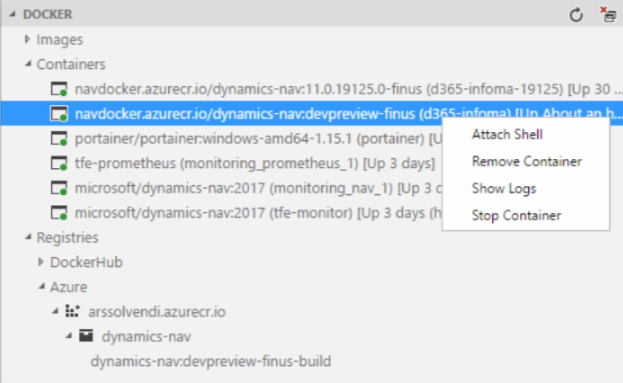 You can get it by pressing F1 in VS Code and typing ext install vscode-docker or go to the extension tab and search for Docker. The very first result should be named only „Docker“ and be published by Microsoft.

Now this works right out of the box if you are working with VS Code on your Docker host, being it your laptop or a Windows Server somewhere. But what if you want to work on your development machine and the Docker host with the containers is a separate somewhere else? The extension documentation states „You can connect to a docker-machine instance if you launch Visual Studio Code and have the DOCKER_HOST environment variable set to a valid host.“ and while I won’t go into docker-machine here, this also helps you to connect to your Docker host. You just have to do the following three things:

If you want to do this every time you start VS Code, it would probably be easier to create a new shortcut or edit the existing one like this
C:\Windows\System32\cmd.exe /c "SET DOCKER_HOST=tcp://s00-nsys-cont1:2375 && START /D ^"C:\Program Files\Microsoft VS Code^" Code.exe"2.

With that setup the Docker extension will work against your Docker host and allow you to manipulate the containers and images there without needing to log into the machine through RDP or remote PS, which makes it very convenient to work even in a distributed environment. The same „trick“ works for the docker cli, so that you can run docker commands in a cmd against the remote host as well but at least for me for the cli opening a remote PS session works just as well. But the extension really makes it very convenient for the most common usages.

« Optimize CI build on AppVeyor with a multi-stage image