On December 3-5 I enjoyed my first DockerCon: With 2,200 attendees in Barcelona DockerCon Europe was about a third of DockerCon US in San Francisco with 6,000 attendees but still a large enough event. In its current state of building on open source roots and trying to make money from enterprise customers through their corresponding offerings, Docker needs to work in both directions, and so it was no surprise that all speakers especially from Docker Inc. were promoting the Enterprise solutions. However, the importance of the thriving open source community and their influence on the products was clearly acknowledged as well by announcing several open source initiatives. The cross-platform nature of Docker also was very prominently featured as most demos happened on Windows clients, most presentations were done on Macs and the main production platform is Linux.

If you want to see some of the sessions yourself, including the keynotes, they were recorded and are freely available here https://europe-2018.dockercon.com/videos.

I have to prepend this by noting that at Axians Infoma we mainly use Windows-based containers, so my views might be a bit Windows-tinted.

The keynotes by Steve Singh (CEO of Docker) and Kal De (CTO of Docker) where constructed around the topics of digitization, transformation and customer orientation. The reiteration of the core values of Docker (choice, agility, security) and the appreciation of the open source roots as well as a promise for continued investment there were good to see. And a lot of nice demos and customer success stories including Desigual and Societe Generale made them quite entertaining.

Docker assemble is a new tool that can be used to create Docker images without knowing how to write Dockerfiles, the “recipes” for new images. Instead the tool is able to look at commonly used application frameworks, tools and applications installed on a physical or virtual machine and figure out how a Dockerfile running those components would look like. This was positioned as the easiest possible way to go “from zero to Docker in seconds”. If that is an actually sustainable and maintainable way into a serious Docker practice might be up for debate but it surely provides an easy way to quick success and a good start into a Docker project. Docker assemble at least for now is only part of the Docker Enterprise Edition and not open source. Microsoft also positions a similar tool called Docker Application Converter (dac) as a possible solution for applications running on old, no longer supported Windows Server versions to get them into a more modern environment with only little ops and no dev effort.

Docker and Microsoft jointly have defined Cloud Native Application Bundles (CNABs, see https://cnab.io), an open specification. This allows application deployments across today’s boundaries where until now you needed multiple tools to target different platforms or components like Cloud IaaS / PaaS providers (AWS, Azure, GCP), container orchestrators (Swarm, Kubernetes), container runtimes (ACI, local Docker) or even SaaS providers like Azure databases. Of course, the success of this new specification will depend on the support from the different platforms and vendors and also good implementations. However, the cloud-agnostic and open source nature together with backing from Microsoft and Docker should at least give it a shot at success. The first implementations are Duffle by Microsoft and support in the already existing but also at DockerCon officially released Docker App by Docker. A very ambitious goal, but the following slide shows the question that Microsoft and Docker hope to answer with CNABs. A deep dive into CNABs was provided in the secret session “Introducing Cloud Native Application Bundles (CNAB)”. 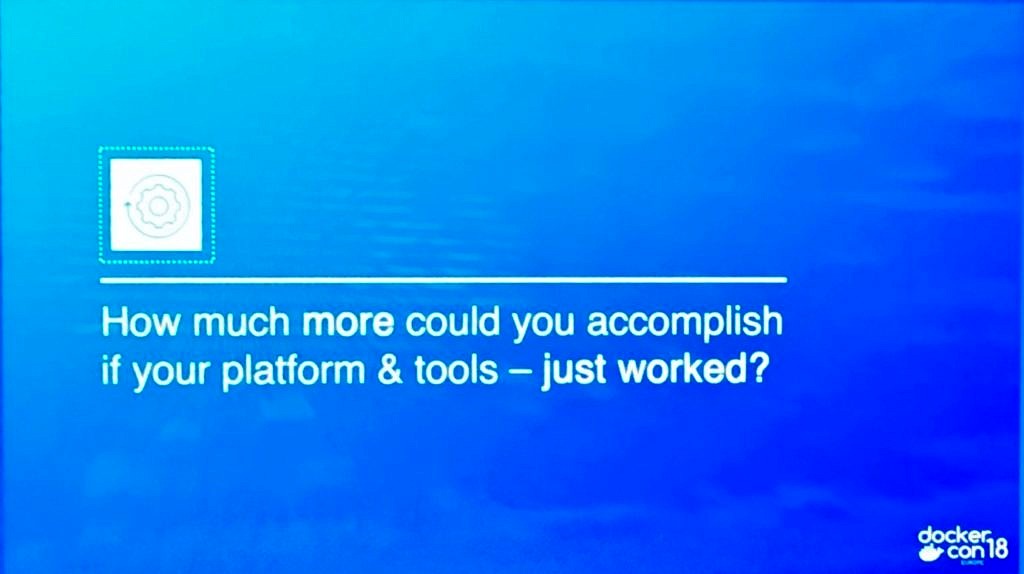 As a way to combine the ease of use for container orchestration in Compose and Swarm with the power and flexibility of Kubernetes, Docker released Compose on Kubernetes as open source. This can be used to easily deployment the same application stacks either through Docker Compose, in a Docker Swarm or to Kubernetes. Again, a good move by Docker to really embrace Kubernetes and try to work together.

As a further addition to their Enterprise suite, Docker announced Docker Desktop Enterprise, the enterprise-ready cousin of the already well-known Docker Desktop based on the community edition. It allows Windows and Mac users to very easily get started with Docker (although it has quite some issues with Windows 10 before 1809) and even Kubernetes. In fact, it brings a one-click installation of a single-node Kubernetes cluster. The Enterprise edition should help drive the adoption across larger companies with stricter IT regulations as the product can be well managed through policies and enforce restrictions. It also allows selecting the Docker Enterprise engine as reference to avoid any problems caused by developers running on the Community Edition while centralized systems are running the Enterprise Edition. Docker Desktop Enterprise enables operations to provide app templates allowing developers to quickly set up an applications stack on their machine. On the other hand developers also can easily build their own Docker apps with the built-in designer. 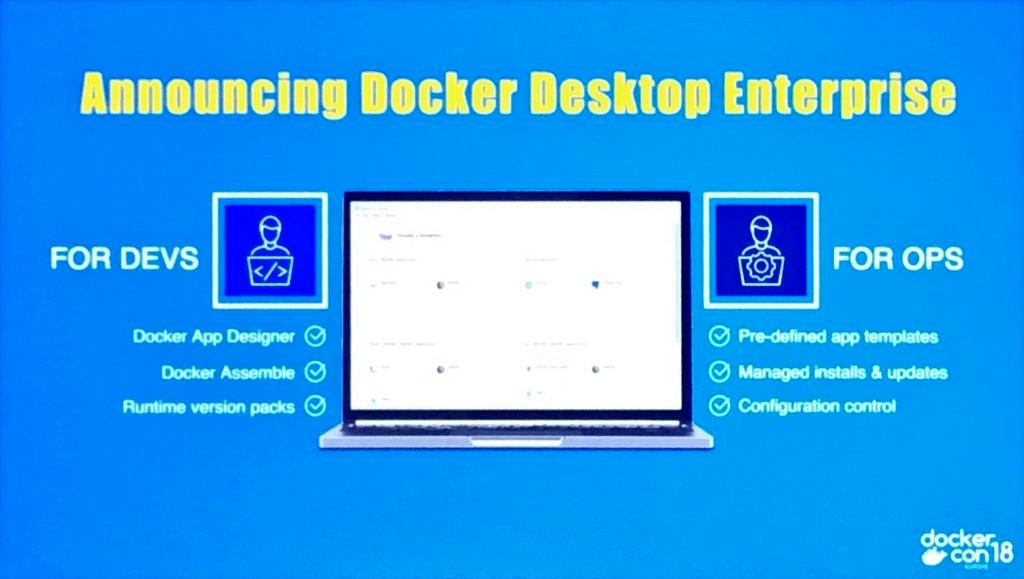 For the session, I want to quickly mention a few of the many who might be worth your time to watch:

DockerCon Europe 2018 was a very interesting conference where Docker showed how they can balance their open source commitment, keeping the developer community there happy with the need to earn money from enterprise customers. If and how this works out remains to be seen, but the approach they are taking makes a lot of sense to me. My personal highlight was an engagement as „speaker“ where I helped participants of Elton Stoneman’s workshop around .NET application modernization on Windows but everything else was great fun as well, I really enjoyed and definitely hope to be back next year.

This post is co-authored by my colleague Markus Lippert who also attended the conference and helped write this post.

Allow access to the Docker Engine without admin rights on Windows »